Southfork is an old ranch property located west of Three Springs and Mercy Regional Medical Center, north of Highway 160, and is bisected by Wilson Gulch Road which was completed in November 2016. A video describing the Wilson Gulch Road project can be viewed below.

The Southfork property was annexed into the City of Durango in 2011 and zoned Planned Development (PD), with one parcel zoned Rural (R) due to topography constraints. Four of the parcels of the Southfork area are owned by the Crader Properties LLC (the Crader family), and one parcel is owned by GRVP LLC (the Growth Fund). The map below shows the Southfork project area. 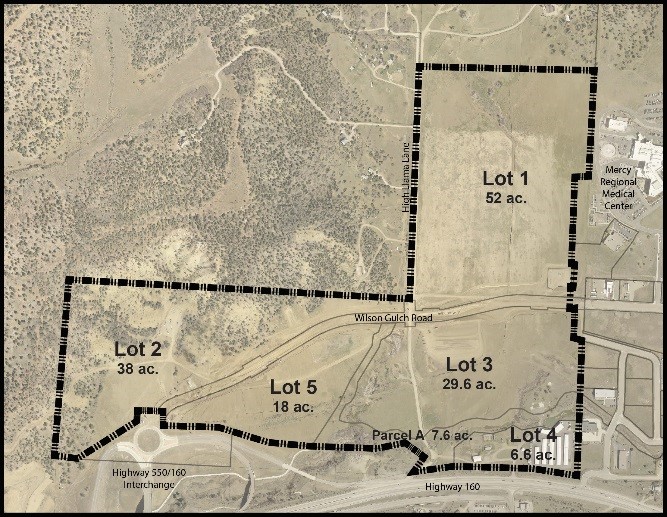 In 2014 (with updates in 2015 and 2016), the City Council adopted Goals, Objectives and Action Steps. One of the Objectives, Objective 4.1, is to "Create districts in the community that embrace the unique character of the area". Action Steps under this Objective include the creation of ten Character Districts within the City of Durango with the Southfork area listed as a Character District that City staff will need to analyze as part of the City Council Goals.

To date, City staff held numerous stakeholder meetings and one Neighborhood/Board & Commission meeting as part of the Southfork planning process.

The stakeholders include the City of Durango, the La Plata County Economic Development Alliance, the Crader family and GRVP. Stakeholder meetings concentrated on the following:

The Neighborhood/Board & Commission meeting was held on September 3, 2015. The presentation (PDF) that was given at that meeting is available. The Draft Concept Plans that were presented at this meeting are available here.

On October 18, 2016, the City Council adopted the Southfork Conceptual Development Plan (as shown below) and the Character District Master Plan document (PDF).